I don’t often find myself with stale donuts, but when I do, this chocolate donut bread pudding is always my go to. Old donuts make great bread pudding!

We have made it to Friday and aren’t overloaded on chocolate yet. How about you? I hope you have been following along with this weeks #Choctoberfest. There have been some really good recipes out there for this event.

What Can You Do With Day Old Donuts?

When we made the double chocolate baked donuts, I’m almost embarrassed to say we had some leftovers. And it’s no secret that donuts are darn good on the day made, but not so much a few days later. What else can one do with stale bread? You got it…Bread pudding. The combination of bread and delicious sauces in this leftover donut recipe warms my heart.

There is nothing hard about this donut bread pudding. My donuts used were about a day and a half old, and I almost felt bad about cutting them up into cubes. But with every chop, I was reminded how yummy they were going to be with a rich bourbon sauce drizzled onto them.

Leftover stale donuts are the star of this recipe. You can certainly make or purchase donuts and let them sit on the counter for a day or two anytime you want to make this recipe.

The bourbon sauce takes this bread pudding to a whole new level.

Bread pudding is a classic recipe because it’s both frugal and easy to make. You can turn leftover bread and stale donuts into a rich and flavorful dessert.

Now we are getting close to the end of #Choctoberfest with Imperial Sugar. So don’t forget to signup for the giveaway if you haven’t already. And if you have missed most of the week, here is the scoop:

Imperial Sugar and our other sponsors have banded together to contribute some awesome prizes for our #Choctoberfest giveaway! Entering is simple – just click below to enter. Here’s what you could win:

We also have a nonprofit sponsor this year – Rescue Chocolate! They make vegan chocolate treats and donate 100% of their proceeds to animal shelters.

Next time you are wondering what to do with stale donuts, look no further than classic bread pudding. 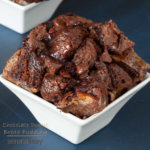 Print Recipe
This Chocolate Donut Bread Pudding is a twist on classic bread pudding. This leftover donut recipe is the perfect way to use stale donuts. The donuts are baked in a creamy custand and topped with luscious bourbon sauce.

To make the sauce:

Recipe Source: SerenaLissy.com All images and content are copyright protected. Do not use our images without prior permission.
Keyword: bread pudding, chocolate donut bread pudding, donuts, leftover donuts, stale donuts