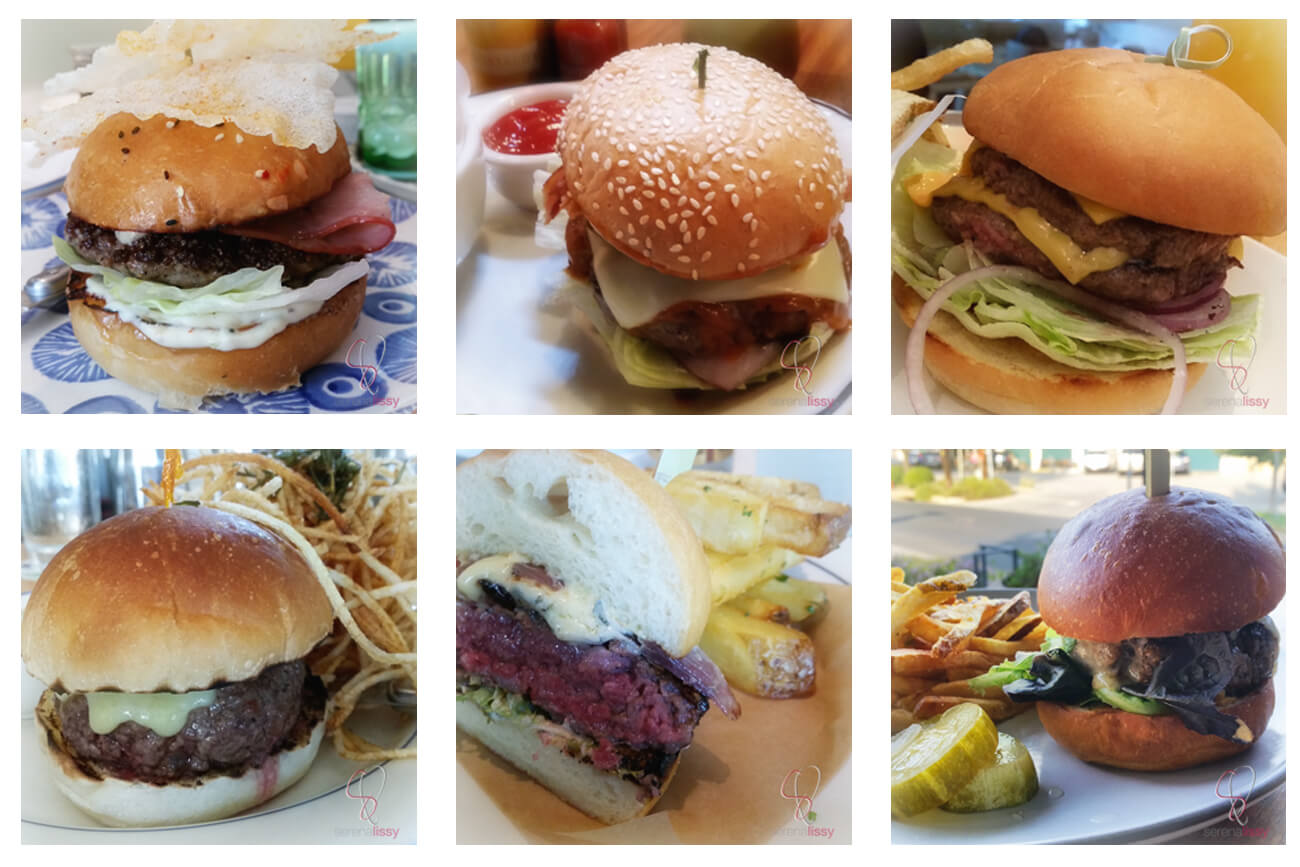 In August McGuire Moorman Hospitality Group, MMH, decided to have a burger challenge in Austin. I saw the social media buzzing around it and thought for a few days on whether I would participate or not; I love the MMH restaurants, but I’m not really a big hamburger fan. The dangling carrot for me was the promised $250 gift certificate to my favorite restaurant if I completed all six of the burgers in seven days. After sleeping on it, I decided to give it a go. I rounded up my trusty hamburger lover, Will, and off we went.

Here is where the problem begins, I’m struggling with how to proceed with this post. I could tell you all the great and wonderful things about the contest, but as each day went by they got less and less. Or I can share with you all the problems that came about during the contest. (Which would make this a much juicier read.) I’m telling you, all the things that went wrong with this burger challenge are the stuff that grad students get to study and analyze for a research paper in marketing. Mark my words, some UT students will be reading case studies in five years about this fiasco.

Before I even begin to discuss the burgers, lets talk about the rule changes that took place.  On August 14, rule change #1 came into play. No happy hour pricing on the burgers. Which is fine, but should have been a rule from the beginning. Not two weeks into the contest after the Accountants ran numbers and determined the potential cost of this contest.

I wouldn’t really call rule change #2 a rule change, but instead a twelve day early shutdown of the contest banning any new players after August 19th. With their instagram image reading, “HOLY SMOKES!! ***WE’VE HIT OUR BURGER CHALLENGE CAPACITY!***

Imagine that! Austin is a city known for its foodies, then you throw in $250 prize, these people can eat some burgers! Oh and for what it’s worth, there is also a hat included with the prize; in case that is important to anyone. Maybe rule change #3 should be, “We can’t afford to produce the hats, so there won’t be any”. Which actually would be great because I know where my hat is going. Or maybe I should save it for that UT grad’s research paper, they might get extra credit for props.

Now for the scoop on the hamburgers. We started at Elizabeth Street Cafe. Because this burger is “off menu”, we figured it would be the hardest to obtain. We started a few weeks into the contest, and this theory was proven totally incorrect. All in all, this was a pretty good burger. It was an Asian inspired burger with griddled ham, Japanese mayo, and kimchi pickles. Now my trusty hamburger mate, Will, is someone that has a severe dislike for mayo anything. The request to have the mayo on the side was made by us, yet ignored by kitchen staff. The burger was priced at $14. I’m kind of taking the approach that $14 for a burger and nothing else on the plate, a simple request for mayo on the side should be easily done. I chalked it up to a busy night for them and left it at that.

Due to some travel schedule conflicts, we needed to power through this challenge quicker than a week. So on day #2, we decided to double up and go for lunch and dinner burgers. Not sure what the heck I was thinking…but it had to be done. Lamberts was the second burger for us. They call it the “Wood Grilled Cheeseburger”. Nothing fancy about this burger at all. Just a beef patty with lettuce, onion, jalapeño, bacon and cheese. Oh, don’t forget the BBQ sauce spread all over it. Safe bet, good service, and the seasoned waffle fries made it a great lunch experience. $16 for this burger and fry combo.

I know they get really crowded and we hadn’t made reservations for here. Still full from lunch, we arrived just as they opened for dinner. We quickly found a small table at the bar, and were soon joined by several other people that were all discussing the burger challenge. This was an indicator of how social this contest would become, but more on that later. The burger we received was a sizable sandwich for a double cheeseburger. (I know what you are thinking…no we didn’t get to count this as two burgers) Coming from California and having eaten many In-N-Out burgers, this is the closest that I could come to describing the burger. Two thin patties, lettuce, tomato and a thousand island, mayo-ish dressing. (Ordered on the side just for Will) It was a tasty burger. In case you didn’t know, Perla’s has made my Best of Austin desserts list for their salted butterscotch pot de crème, how could I pass on the opportunity. Even though we were there for the burger, the dessert was the hit of the night for me.

I officially have the meat sweats. We start to plan for the remaining three burgers based on their lunch and dinner schedules because we are now entering into the weekend restaurant scene. For those of you not familiar with Austin, for a town this size, the weekends can be chaotic at best, it’s a whole other animal. Having seen so many other burger challenge participants at each restaurant we visited, we realized that reservations and solid planning would be key to completing this. So I called up Josephine house and got the last reservation available on Saturday evening. Woot! We were guaranteed a burger with the reservation. Now we just had to get through Friday at Clarks Oyster House and Jeffrey’s. Should be simple, right?

We arrived to Clark’s Oyster Bar at 11am just as they opened for lunch, and within minutes the entire bar was full of people ordering hamburgers all sharing battle stories. Here is where the social aspect kicked in. We ended up chatting with other participants comparing notes on best burgers eaten, who had reservations where, what lines had they encountered, and even call back lists and processes for cancelled reservations that were in place at the restaurants. Here is where we learned that Jeffrey’s was crazy. “Plan for over an hour wait at Jeffrey’s outside with no guarantee for a burger!” Waiting over an hour for a hamburger is something I have never done, nor will I do again. Shoot, I have never been to Franklin’s BBQ due to the long wait!

Will and I now felt the pressure of the burger challenge. Jeffrey’s was going to be the make it or break it piece in our burger quest. We will have five of the six burgers done, we can’t miss the last one. While waiting for the burger to cook at Clark’s we planned the strategy to get to Jeffrey’s and decide we should be waiting in line by 3:30pm.

But I’m getting ahead of myself, let me share the Clark’s burger experience. Maybe I should keep it short by saying, (well actually I want to shout), BEST BURGER OF THE CHALLENGE! Angus patty, pan roasted, and butter basted made this the most flavorful, juiciest, delicious burger of the challenge, melted gruyere and a mayo based sauce added to the flavor. (You guessed it, no mayo for Will) Shoestring potatoes with fried rosemary on top. Good grief, this was my favorite burger; simple, straight forward and well executed. I wish I could of squeezed in their bread pudding for dessert, but I just couldn’t do it.

So with full bellies, back to work we went with plans to get to Jeffrey’s by 3:30.

I’ll just start with it’s a hot August day in Texas, y’all… Nothing like sweating profusely, standing outside for over an hour with a bunch of other hamburger crazed people. The manager was efficient with continual updates on the burger count and how many of us would be getting in. They even provided ice, water and cups for the 45 or so people in line. An hour wait, and the time had finally come. We were confirmed to get inside and get a burger. Phew…

They only seated people in the bar area. If you have ever been in here, you know that it only holds about 35 people. Needless to say, Will and I got tablemates. People just needed to sit anywhere and get the burger ordered. It was good company and great to hear their stories as this was their last burger of the challenge.

I was excited to try the Jeffrey’s burger. At $24, one could consider it upscale. The patty was prime wagyu beef and served juicy and pink; cambozola, caramelized onions, all topped with a horseradish and caper mayo made for tasty flavors. Here is where it went wrong. Someone at the next table asked the wait staff to remove an item on the burger and the response was, “You either get a burger with nothing on it with a bun, or you get it the way we prepare it. No substitutions!” For $24 we got a suck-it-up-buttercup attitude with zero customization. Wow, makes me glad to try this place out, NOT. Also makes me probably not want to go back to Jeffrey’s. I understand they are busy. But wow, to cut out all customer service and make a snarky comment like that. Ugh, that’s when it was crystal clear this contest was out of control. The staff was tired, the patrons were tired. Shoot the guy at the table across from me didn’t even eat the entire $24 burger. He stated, he was done and just had zero interest in the burger and was so glad this silly competition was over for him. Now I must say Will was a trooper, he sucked it up, scraped off all of his mayo and powered through it once the burger arrived.

And now we are down to last but not least, Saturday night dinner at Josephine House. Our burger is guaranteed, well almost…I realize from rule changes #1, and #2, that nothing is guaranteed with this contest. The odd thing for us was that all week we had a frenetic, crazy, uncertainty laden experience, and when we got to Josephine house we were quickly seated on a cozy patio with no line, or overload of people demanding burgers in a completely relaxed atmosphere. Nice change, right? We sit down, order the burger, a couple of cocktails, and clink cheers to the finalization of my meat sweats and whining, and try to decide where we are going to get our $250 certificate for.

The burger arrives. It’s a thick patty dressed with harissa aioli and served on a homemade bun. The burger is topped with cheddar and grilled onions. Yes, you got it, we requested aioli on the side. The aioli was not served on the side, but on the burger. Finally we had enough of paying for food that wasn’t prepared properly and requested the burger to have no aioli as originally ordered. The waiter quickly took the burger away, came back with a new one, and after biting into it we learned the burger was well done and not even the medium rare that we requested. After four days of the craziness and six burgers, instead of making a request to the waiter to fix the $18 burger again, we just handed him our MMH Burger Challenge card and asked him to stamp our last stamp. We were done! 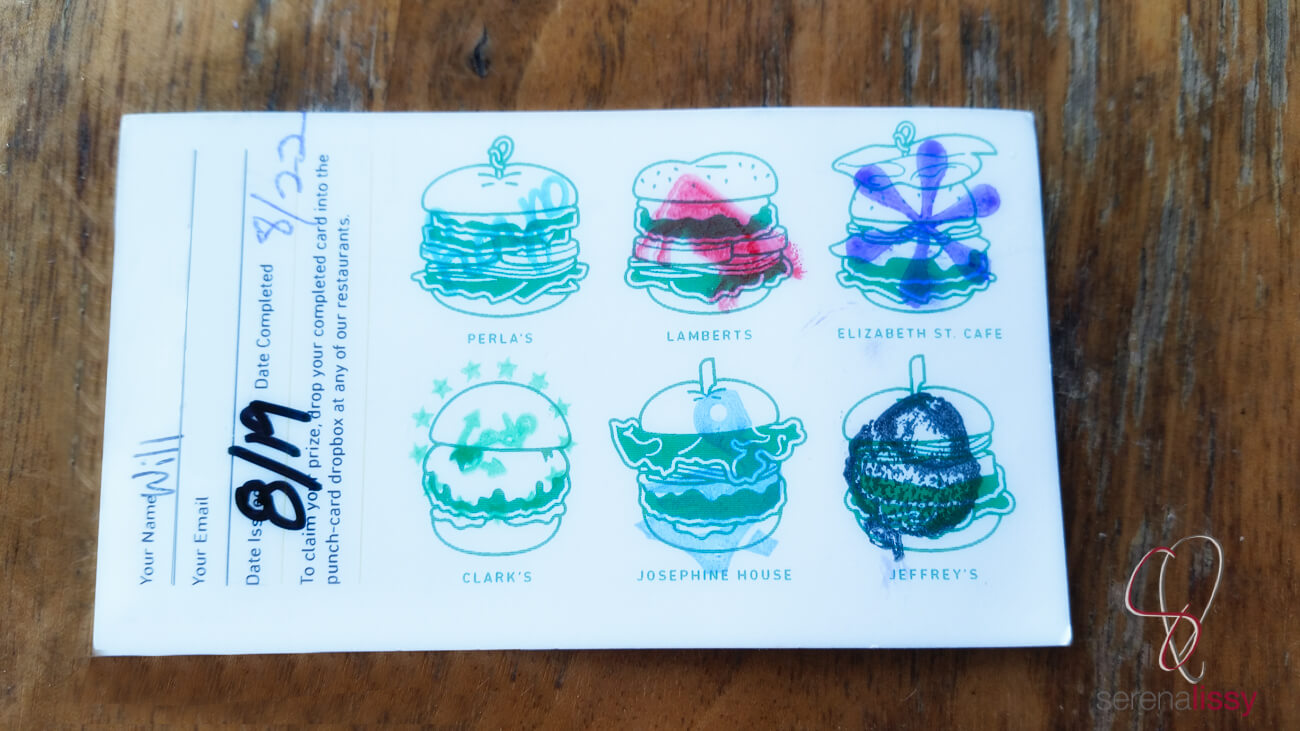 Here is my ranking from best to worst:

Next Post: Don’t Just Make Them Hungry, Make it a “Must-Have” Previous Post: The Good, The Bad and The Ugly
Food Advertising by