With Thanksgiving being over and the abundance of fruits from our Farmhouse delivery, we were left with no choice. In case you didn’t notice, I’m attempting to justify one more dessert during the holidays. We didn’t want anything to go to waste, so what’s one more…right? Or maybe I’m just planning for easy Christmas dessert recipes 🙂

I’m telling you, it doesn’t get much easier than cran apple crostata! Sweet apples, tart cranberries, and a delicious galette dough. The homemade pie dough is super simple; there is no sense in buying a pre-made pie crust dough; it wouldn’t really be a benefit. Plus, the homemade crust tastes better! And the simple fruit filling is apples, cranberries, flour, sugar, and cinnamon. Cranberry Apple Crostata is simple, rustic, and a completely lovely Christmas recipe.

How To Make Cran Apple Crostata

This recipe made one large crostata, but you could easily split the dough into two and make two smaller apple cranberry galettes.

I baked this on a pizza stone. You could use a large baking sheet if you don’t have a stone. I like the texture of the crust when it is baked on the stone. It takes a bit longer because of the time it takes to heat the stone in the oven, but well worth it in my mind.

Can I Freeze Unbaked Crostata?

When I was in culinary school, I worked at a teashop, and they sold individual crostatas daily. We would make these, and instead of baking them right away, we froze them. Then the morning baker could take it out from the freezer and bake fresh. I haven’t tried to freeze this particular recipe, but I believe it would work fine. I’m just questioning if the apples would become a bit browner than you want from the air, but there should be no change in the taste.

What Type of Apples Are Best in Crostata?

I used honey crisp apples. You could use whatever ones you have. Granny Smith, Pippin, or your favorite variety will work for this recipe. For the cranberries, I saved a half cup of cranberries from my bag of fresh ones because I knew I wouldn’t use an entire bag of cranberries for the Thanksgiving day cranberry sauce.

What Is The Difference Between a Galette And a Crostata?

You can call this a Cranberry Apple Galette or a Cranberry Apple Crostata. They are basically the same thing. A Galette is French, and a Crostata is Italian. Both are free form and rustic, with the crust folded up around the filling.

This rustic, open-faced tart is one of those recipes you could serve at breakfast, mid-day bunch, or for an after-dinner delicious dessert. It’s a great blend of tart and sweet with a flaky, tender, buttery crust. The dessert is pretty perfect as it is, but you could also add a little vanilla ice cream or whipped cream.

I hope you enjoy the recipe as much as we did. Please share if you end up making it. 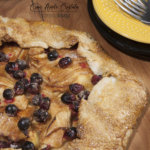 Print Recipe
Loaded with apples and cranberries this rustic dessert is the perfect balance of tart and sweet with a flaky and tender crust.

Recipe Source: SerenaLissy.com
All images and content are copyright protected. Do not use our images without prior permission.
Course: Dessert
Keyword: Christmas, cran apple crostata, cranberry apple, galette, rustic

As an Amazon Associate and member of other affiliate programs, I earn from qualifying purchases. What that means is if you click on one of our affiliate links, they may toss a few pennies our way for a commission.