I don't know about you, but we seem to get a lot of gift baskets the last quarter of the year and they usually contain pears. So we are whipping up some easy holiday baking recipes utilizing pears this month and this cranberry pear spice crisp is top on the list.

Because pears are related to apples, it's a general rule that if a recipe calls for apples, pears can be used instead. Just like apples, there are a huge variety of pears to use and they make a great dessert.

We used Bosc pears for this recipe, they have a densely bold, sweet flavor. It holds up perfectly with hearty spices like cinnamon, clove and nutmeg, not to mention tart cranberries too!

The hardest part of this recipe is cutting the pears, if you count that as difficult. You are basically measuring everything out and putting it into the ramekins, then topping with the oatmeal crisp. I'd keep the pear slices thin like you see in the image and be consistent with cut and size for even cooking. We made four ramekins plus this white larger dish. If you wanted you could even put the entire recipe into a 9x13 pan and bake for a family style dish.

Crumbles, crisps, and cobblers often get lumped together as the same dessert. While they share some of the same ingredients such as fruit and flour, each one has a very distinctive texture that sets it apart from its siblings.

Cobblers have a biscuit dough with a buttery, delicious crust. Crumbles and crisps are remarkably similar. The main difference being that crisps have whole oats and crumbles do not, yet once baked their texture is much the same.

Crisp toppings are always a hit, regardless of the time or season. Not only can you make them in large batches and store them for later use, but they also freeze beautifully to give that extra touch of crispiness whenever you need it.

How to Make The Cranberry Pear Spice Crisp

How to Make The Crisp Topping

If you find yourself looking for other cranberry or even other easy holiday baking recipes you could try the CranApple Crostata or Chocolate Cranberry Scones. Don't let fall go by without making this crisp. 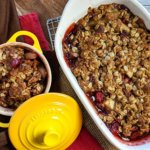 Recipe Source: SerenaLissy.com
This website provides approximate nutrition information for convenience and as a courtesy only. Nutrition data is gathered primarily from the USDA Food Composition Database via Spoonacular API, whenever available, or otherwise other online calculators. While this information can be helpful in estimating the nutritional information of a recipe, it is by no means accurate or official and is not evaluated by the Food and Drug Administration.
All images and content are copyright protected. Do not use our images without prior permission.

As an Amazon Associate and member of other affiliate programs, I earn from qualifying purchases. What that means is if you click on one of our affiliate links they may toss a few pennies our way for a commission.

Join us and you will learn all sorts of creative techniques from baking to food photography that is easy enough for a novice to recreate at home, but look and taste like they were made by a seasoned pro.